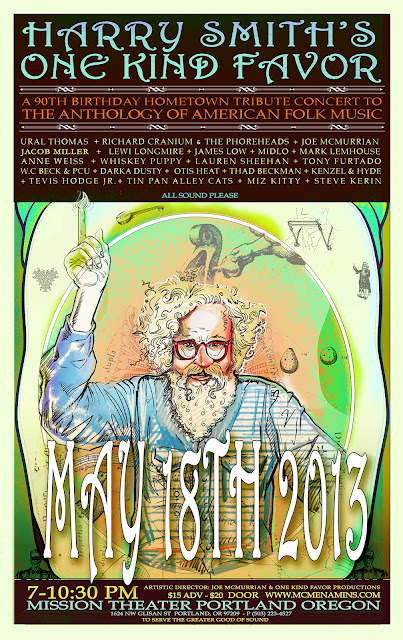 A concert to serve the greater good of sound!

Held in conjunction with the the Harry Smith PDX


at the Hollywood Theatre on May 16 2013
http://harrysmithpdx.wordpress.com

3 White Horses in a Line

and a box of surprises!

A multi-act show featuring original interpretations of material from Harry Smith’s Anthology of American Folk Music. This concert will be held in Harry’s place of birth, Portland Oregon and will serve as a proper tribute to one of the most important creative minds in history.

Produced by Joe McMurrian and One Kind Favor Productions The "Anthology of American Folk Music" was put together by Harry Smith for Folkways music was originally issued in 1952 in three volumes of 2 LPs each, with a total of 84 tracks collected from old records. It is said that this collection played a seminal role in the folk music revival of the late 1950s and early 1960s, influencing and inspiring the generation of Bob Dylan and Joan Baez. Smith stated that he wanted to create a cultural change with music, and he did. His vision represented not a limited traditionalist point of view based on maintaining the status quo and retaining songs the way they were then. Smith believed in the eternal progression and morphing of the songs them selves. The songs were archetype forms to build upon, not hold up behind bars in a museum.

It is like looking back in time, sort of like the Hubble telescope, only we are looking at images from our own human heritage, and perhaps ourselves.

a "genetic code" for modern music

Harry Everett Smith was born in Portland, Oregon on May 29, 1923.
Harry Smith was also a self taught experimental filmmaker. He grew up in Washington State, in Anacortes and Bellingham. His father worked in canneries and his mother taught on the Lummi Reservation.

Harry Smith received the Chairman’s Merit Award at the 1991 Grammy Awards ceremony in recognition of his impact on American culture.  His thank you speech was simple. He said, “I’m glad to say my dreams came true. I saw America changed by music.”
He died later that year, at the Chelsea Hotel, NYC, on November 27, 1991.

Harry Smith PDX at the Hollywood Theatre on May 16 2013 in conjunction with the Portland Animation Festival
http://harrysmithpdx.wordpress.com

Harry recording NW indians while only a teenager.
This recording machine has been refurbished and will be on view at the show! and recording! 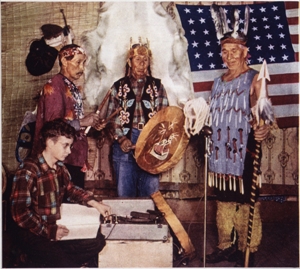 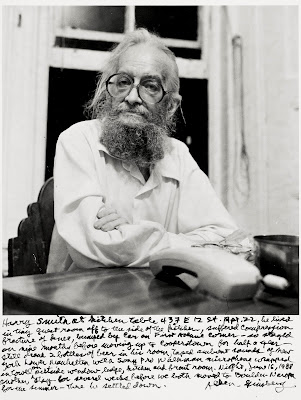 Other Smith events this week!

On May 16,  2013,  Oregon Cartoon Institute presents the first ever Harry Smith Seance,  in partnership with Northwest Animation Festival and Hollywood Theatre.
Rani Singh, the director of the Harry Smith Archives at the Getty Institute will introduce films by Harry Smith, projected in 16mm.  Panel discussion after the films with Sheldon Renan, Darrin Daniel, and Rani Singh, followed by Q & A. Portland, OR – April 16, 2013 – Genius.  Eccentric.  Archivist.  Mystic.  Filmmaker.  And native Portlander.  Harry Everett Smith (1923 – 1991) is best known for inspiring a generation of musicians and changing the course of American music with his touchstone collection of classic blues and jazz records, “The Anthology of American Folk Music” (Folkways Records).  Released in 1952, the compilation of 82 songs originally recorded between 1927 and 1932 introduced performers like Mississippi John Hurt and Blind Lemon Jefferson to the exploding Greenwich Village folk scene (Bob Dylan, Phil Ochs, Joan Baez, etc.).  But “collector” was just one of the odd hats that Harry Smith wore.  He was also an experimental filmmaker, ethnomusicologist, anthropologist, painter and an occultist who claimed to have received shamanic initiation at an early age.  To commemorate his 90th birthday, Portlanders will have two quirky nights to explore them all.

The climactic event will be at the Mission Theater on May 18th (1624 NW Glisan St / 7pm / $20 adv / $25 door) with “One Kind Favor” - a huge gathering of over 20 Portland musicians who will perform their own versions of  songs from “The Anthology of American Folk Music”.  As a youth, Smith recorded many NW Native American singers, so the event will open with a rare demonstration of his original paper disc recording machine and an Indian dance troupe.

Blues musician and producer of “One Kind Favor”, Joe McMurrian, said, “The real power behind the Anthology was the way it drew our attention to those eight years [1927-1932] before there were any categories and labels to music.  Harry Smith taught Dylan and all those other guys who were so influenced by the Anthology that there had once been such wild and exotic music in America.  And then they went and made their own wild new music.”

Leading up to the concert, the Hollywood Theater (4122 NE Sandy Blvd) will host two events both on May 16.  At 3pm, a free event featuring lectures and panel discussions will explore Harry Smith’s Northwest roots and in particular his deep populism, DIY aesthetic, and permanent outsider status.  At 7pm ($10), in partnership with the Oregon Cartoon Institute, there will be viewings of some of Harry Smith’s animated films along with a presentation by Rani Singh, the director of the Harry Smith Archives at the Getty Institute, who was with Smith when he died at the Chelsea Hotel in NYC.  In a nod to Smith’s devotion to the occult, a séance will be held in the hopes of communicating with him somewhere beyond this mortal plane.